In 1769 Admiral Grigori Spiridov’s squadron anchored Cala Figuera with a large part of the sick crew. Many died and were buried in the caves of said cove. Later his remains would be transferred to the La Mola cemetery where a monument would be raised 50 years later.

In the 18th century, during the war between Russia and Turkey, Tsarina Catherine the Great needed to open a new front to the Mediterranean by entering through the Black Sea, Great Britain gave her technical support and offered to stop at its ports, including the port of Mahón. This is how Catalina commanded Admiral Grigori Spiridov in command of her squad, which she anchored at Cala Figuera before going to Turkey.

Much of the crew arrived very ill. The military archives speak of 367 patients (supposedly of scurvy) and the total number of deaths is unknown but surely there were more than 200, among them the son of the admiral himself. Andreas Spiridov was buried in the Concepción de Mahón church, built for the Greek community to dedicate to Orthodox worship. The other dead sailors were buried in the caves of Cala Figuera.

Tsarina Catalina II also wanted Menorca to have a Russian hospital to attend to her sailors, this would have been built on the land that the Greek community had in La Mola and included a cemetery (also known as a Greek hospital). In 1782, during the siege of the Castle of San Felipe by the troops of the Duke of Crillón, a battery was placed behind the Russian hospital of La Mola to attack the Castle and the building was destroyed.

In 1820, fifty years after the death of the sailors, the French consul for the Balearic Islands, Froment de Champlagarde, who also represented the interests of the Russian Empire in the region, decided to transfer the remains to the Greek cemetery of La Mola. At that time an 11-meter high obelisk was also erected, this monolith is reflected in a painting that is preserved in the Moscow museum.

When the Fortress of Isabel II was built years later, the monument was probably destroyed because it was considered to be a marksmanship reference for the possible enemy. 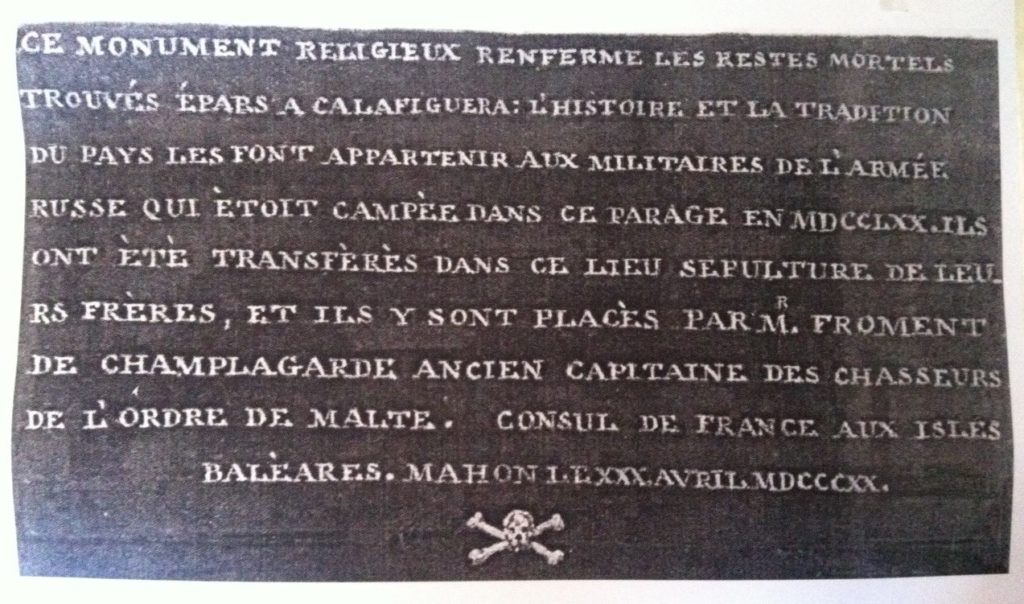